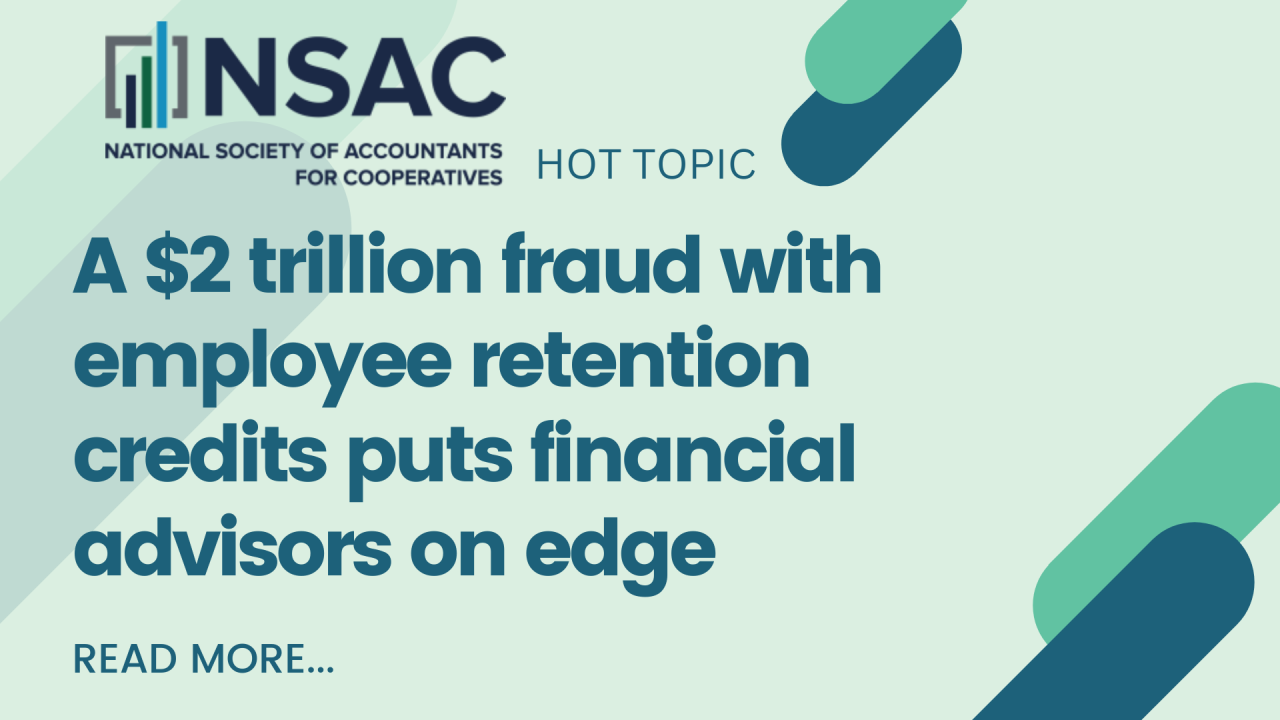 This story has been updated with comments from the IRS.

Larry Pon was driving home from the gym following a workout in Redwood City, California, when the too-good-to-be-true barrage began. He was glued to a local sports radio station, digesting the latest baseball disaster for the San Francisco Giants. But over the course of an hour, he heard four different commercials from four different companies advertising a lucrative tax break for small business owners.

That Sept. 18 wasn't the first time Pon, a certified public accountant, had heard aggressive pitches on the airwaves for the employee retention credit, a multibillion-dollar federal program that's part of roughly $1.7 trillion in pandemic relief for small businesses since 2020. But lately, the come-ons for the ERC seemed increasingly brazen.

"It's usually a guy shouting, 'you're entitled to $28,000 per employee!' in that really annoying voice," Pon said. Seedy marketers of the tax credit "are buying time on all the stations — it's a nationwide thing. There's a cottage industry of ERC mills."

In fact, fraudulent claims of the credit could be one of — if not the — largest tax-related scams in U.S. history.

According to a little-noticed report on Aug. 31 by the Treasury Inspector General for Tax Administration (TIGTA), an independent office known as the Treasury Department's official watchdog, the Internal Revenue Service had identified more than 11,000 "suspicious" federal returns that claimed more than $2 trillion in credits as of March 10. The report also said that the IRS doesn't not have the means to verify whether a business claiming the credit actually qualifies or to audit employers filing amended returns to claim the credit — a review required by law.

"Any program with this much cash and publicity can lead to fraud and abuse," said Perry Green, the chief financial officer and senior wealth strategist for Waddell & Associates, an independent advisory firm in Memphis, Tennessee.

When free government money is on the table, good financial advisors and accountants help clients determine if they're eligible to receive it. At the same time, advisors have to protect their customers from shadowy consultants and middlemen who pop out of the woodwork to angle for a cut of the take, regardless of whether or not a taxpayer they hook up is eligible.

The ERC program aimed to incentivize small businesses, the backbone of the American economy, to keep full-time employees on payroll during the pandemic, instead of laying them off as the economy severely contracted and businesses faltered or closed due to consumers staying home or losing their own jobs. The credit is essentially a rebate to businesses that reimburses them for paying employee salaries. It is refundable, meaning that if a taxpayer doesn't owe any federal tax, she can receive a refund from the IRS. Akin to free cash, it's one of the most valuable forms of tax benefits, and advisors catering to small business clients are widely aware of it, with many practices offering commentary on their websites.

Fraudulent and inaccurate payments are an issue because even though the program has ended, a business can file an amended tax return, known as Form 941-X, claiming the credit. The IRS had a backlog of roughly 207,000 unprocessed amended returns claiming the benefit, according to an AICPA Town Hall recorded on Sept. 8. Edward Karl, the vice president of taxation at the trade and lobbying group for the accounting profession, told the webinar that the IRS was "aware" of "aggressive ERC firms."

The deluge of marketing enticements glosses over the complicated rules of the credit, which emerged in March 2020 as part of the CARES Act, a roughly $2.2 trillion federal package that President Donald Trump signed to combat economic fallout from the COVID-19 pandemic. The credit was extended through June 2021 under the Consolidated Appropriations Act of 2021, which allowed employers who had gotten forgivable Paycheck Protection Program loans to apply for it. Last March, the American Rescue Plan extended the benefit through 2021 and made a new category of business — a "recovery startup business" launched during the pandemic — eligible.

Every corner of the wealth management industry is racing to deploy behavioral science findings to improve investment outcomes and make clients happier. But there are right ways and wrong ways to do it.

The TIGTA report said that the IRS had recently "updated an identity theft fraud filter" designed to flag "suspicious" tax returns claiming the credit. It then said that "as of March 10, 2022, the IRS had identified 11,096 returns with more than $2 trillion in credits claimed."

The complex rules for claiming the benefit have been a morphing tangle. Businesses, including nonprofits "engaged in a trade or business," with 500 or fewer full-time employees generally had to be either closed due to government orders or suffering a "significant economic decline" due to the pandemic, though other factors could make them eligible. Early on, employers could get a maximum credit of $5,000 per employee for 2020, so a business with 100 workers could receive $500,000 that year. The per-employee credit amount was later boosted to $7,000 per quarter in 2021 — equivalent to the $28,000 that Pons heard on the radio. A subsequent law killed the credit in the fourth quarter of 2021 for regular businesses but preserved it for "startup recovery businesses" that opened their doors after Feb. 15, 2020 and had gross receipts of $1 million or less. The ERC program has complicated requirements for determining a business's decline in income.

The shilling by ERC promoters, most of whom are not licensed accountants or credentialed financial advisors, has given the latter two professions a lot to counter.

Mike Sylvester, an accountant in Fort Wayne, Indiana, recently tweeted that a "client just called me all excited because some hack told him he qualifies for 148K of ERC credits for 2021. Hack charging 37K to do paperwork." One problem, he added: the client's income increased each quarter in 2021 compared to 2019. "Does NOT qualify," Sylvester concluded.

It all means that advisors with small business clients may have to haul out some cold water.

"This is a particularly lucrative credit for small business owners, and they're the most likely to get audited," said Mack Bekeza, a certified financial planner at Accelerated Wealth in Colorado Springs, Colorado. "Advisors should always make sure you have the right documentation and do it (take the credit) with strong reasoning."

ERC mills appear to have caught the attention of the IRS. Dan Chodan, a partner at Trout CPA in Lancaster, Pennsylvania, wrote last week on Twitter that he had spoken with "a senior employment tax IRS auditor leading a team awaiting their training and ERC cases." The tax agency, he wrote, conducted a pilot program in recent months and was training agents to take a microscope to taxpayers claiming the credit. "IRS is pulling 90% of exam staff to focus on audits of the Employee Retention Credit," he added.

Bruce Friedland, an IRS spokesman, said in a statement that "With any new tax law, the IRS conducts training for examiners on how to successfully examine the issue. In order to conduct examinations of Employee Retention Credit claims as efficiently as possible, we are training groups of agents on the Employee Retention Credit." He called the benefit "an important source of relief for small businesses in need of assistance," adding that "the IRS takes fraudulent claims of pandemic relief funds very seriously." The agency will get $80 billion in additional funding, with more than half going to enforcement efforts, under the Inflation Reduction Act that President Joe Biden signed last month.

The Joint Committee on Taxation, the nonpartisan scorekeeper of Congress, initially estimated that the ERC program would cost around $55 billion. Expansions of the credit ramped the total up to around $85 billion. The total cost "remains uncertain," the Congressional Budget Office wrote in June 2021, in part because the IRS was, and continues to be, mired in a backlog of unprocessed returns, some of which claim the credit.

The PPP program, also aimed at helping pandemic-hit businesses, is estimated to have cost more than $800 billion. More than $64 billion in the loans given to 1.4 million taxpayers showed at least one sign of fraud, according to an academic paper updated last October, which concluded that actual fraud may be twice that figure. One former federal prosecutor dubbed the PPP program "the biggest fraud in a generation." The PPP figures are a fraction of the $2 trillion in suspicious claims figure that TIGTA reported.

Waddell's Perry said that he had several large and small employers who have claimed the credit.

"In each case, they used outside accounting or law firms to file the claims and kept careful, detailed records," he said, adding that they filed their claims "with the expectation of being audited."

This story has been corrected to state that the annual maximum a business could claim in 2020 was $5,000 per employee for the calendar year, not per quarter. So the total that a business with 100 employees could receive that year was $500,000, not $2 million.  It has been clarified to reflect that while the ERC was not available to owners of long-established businesses during the fourth quarter of 2021, it was available during that period to newer "recovery startup businesses" that opened after February 15, 2020 and did not have annual gross receipts exceeding $1 million. In 2021, the credit was expanded to $7,000 for the second and third quarters for all businesses; in the fourth quarter of that year, it was available only to a "recovery startup business."