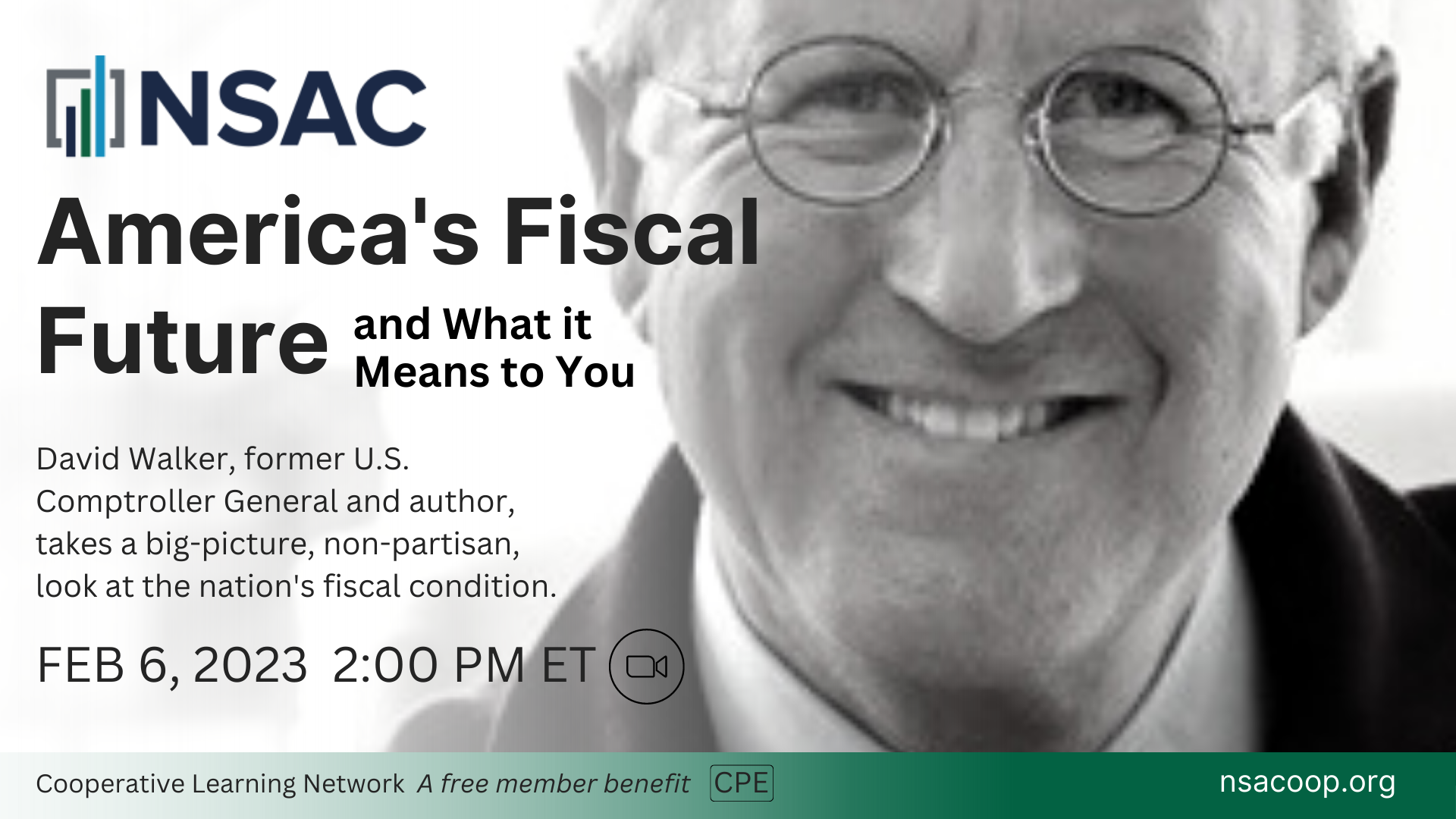 David Walker, former U.S. Comptroller General, and author, will speak to NSAC and take a big-picture, non-partisan, look at the nation's fiscal condition what future forecasts mean to you.

David Walker has over 40 years of award-winning domestic and international leadership experience in the public, private and non-profit sectors. Dave is a former practicing CPA, a strategic advisor to top government officials, and the immediate former Comptroller General of the United States. Most recently, he was a Distinguished Visiting Professor at the U.S. Naval Academy.

Dave is a speaker and best-selling author of the book entitled America in 2040: Still A Superpower was published in October 2020 and updated in February 2022.

Previously, Dave earned three presidential appointments with unanimous Senate confirmation from Reagan, Bush, and Clinton with the last being his appointment as Comptroller General of the U.S. and head of the U.S. Government Accountability Office (GAO) for a total of 15 years of federal service. Dave also has over 20 years of private sector experience, including approximately 10 years as a Partner and Global Managing Director of Human Capital Services for Arthur Andersen LLP.

Dave currently serves on various boards and advisory groups. He is a member of the Board of Directors for the Committee for a Responsible Federal Budget, the Center for the Study of the Presidency and the Congress, and the Public Accounting Oversight Board. He is Chairman of the Board of Directors of the Government Transformation Initiative and Co-Chair of the Institute of Medicine’s End of Life Panel. He is an Advisory Committee member for the Peterson Foundation and the Institute for Truth In Accounting, and a member of the Advisory Board of The Can Kicks Back. He is a national co-founder of No Labels. He is also a member of the Accounting Hall of Fame, the Trilateral Commission, the National Academy of Public Administration, the National Academy of Social Insurance, the Association of Government Accountants (AGA), and the Sons of the American Revolution. He previously served as Chairman of the United Nations Independent Audit Advisory Committee and on the Boards of the International Association of Supreme Audit Institutions and the Partnership for Public Service.

Dave has won many international and domestic leadership awards. He has authored three books, is a frequent media commentator and is the subject of the critically acclaimed documentary I.O.U.S.A. He is also listed in the Who’s Who in the World and Who’s Who in America.

Dave holds a B.S. in accounting from Jacksonville University, a Senior Management in Government Certificate in public policy from Harvard University’s John F. Kennedy School of Government, and several honorary doctorate degrees. Dave currently resides in Bridgeport, CT with his wife Mary. They have one son and one daughter and three grandchildren.

Wayne Sine is an experienced and highly knowledgeable professional in the field of Tax. Wayne recently retired as Tax Director from his company, Southern States Cooperative. He has extensive experience working with agricultural cooperatives and has been a long time member of the NSAC. He is extremely active in the NSAC, serving as both past Chapter President of the Atlantic Chapter, past Chair of the Tax Committee, and is currently serving as the NSAC Director of Education.. Wayne's career is marked with several accomplishments, and he has always been involved in many organizations, spreading his knowledge. Wayne is a member of the Legal, Tax, and Accounting (LTA) Committee for the National Council of Farmer Cooperatives. He is also Past Chair of both the Tax Committee of the Virginia Chamber of Commerce and the Virginia Manufacturers Association. Wayne also served on the Tax Policy Committee at the Virginia Society of CPAs, and served as past Region Vice President for the Tax Executives Institute.