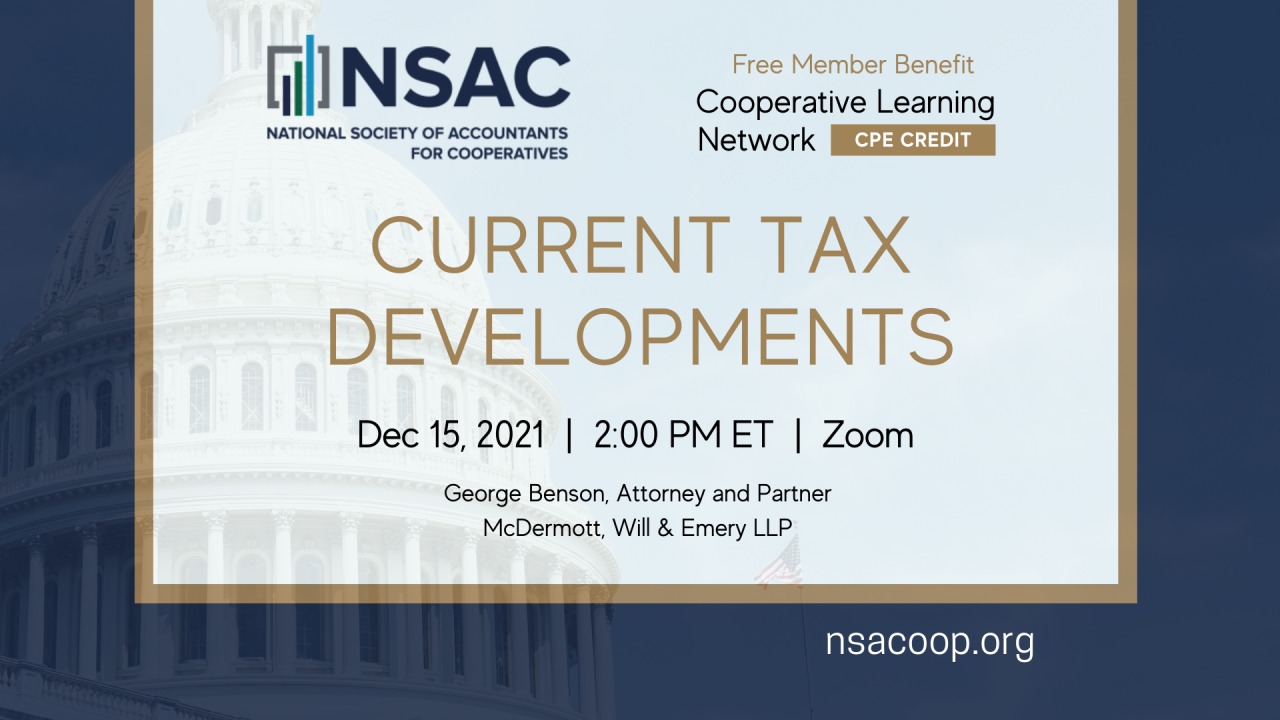 This 60-minute CLN will review tax developments during the past year of particular interest to cooperatives.

George Benson, Counsel, McDermott Will & Emery LLP will briefly review the developments during the past year peculiar to cooperatives. Most significant was the promulgation of the final regulations under Section 199A(g) in January, which preserved the bulk of DPAD for most cooperatives, but were disappointing in some respects. Scheduled (and possible prospective changes) in Section 163(j) will be discussed. There will be an update of the current status of the Ag Processing and GROWMARK cases.

Depending on the status of these bills at the time of the webinar, the tax provisions of the Infrastructure Bill recently signed by the President will be reviewed as well as tax changes of interest to cooperatives in the Reconciliation Bill. If we do not have a bill by then, key provisions of the pending legislation will be noted, and any general tax developments likely to affect some cooperatives will be reviewed.

Benson will described the code provisions specific to cooperatives, but outside of Subchapter T, which may not have been discussed in recent years and may not be widely known.

George Benson advises clients on federal income tax planning, tax controversy and tax litigation matters, particularly in the area of cooperative taxation. George's tax work for cooperatives covers a broad range of issues that arise for cooperatives from their unique status as corporations operating on a cooperative basis. He advises cooperatives with respect to computing, allocating and paying patronage dividends and per-unit retain allocations in accordance with the rules of Subchapter T. His advice in these areas relates to such matters as determining net income or proceeds available for distribution (including distinguishing between patronage and non-patronage income), determining how net income or proceeds should be shared on a patronage basis among patrons (including using allocation units and pools), handling losses, allocating extraordinary gains, and using qualified and nonqualified written notices of allocation and per-unit retain certificates. Over the years, George has provided assistance to cooperatives whose patronage dividends and per-unit retain allocations have been questioned on audit by the Internal Revenue Service. George has helped form new cooperatives, convert existing businesses into cooperative forms (and, where appropriate, obtain letter rulings affirming their cooperative status), convert cooperatives into other forms of business, and convert Section 521 cooperatives and Section 501(e) cooperatives into nonexempt Subchapter T cooperatives. He has provided assistance to cooperatives purchasing or selling assets, entering into joint ventures with cooperatives and others, merging with other cooperatives, or going through the process of liquidation and dissolution. He has assisted cooperatives with cooperative tax and other issues that arise when they engage in business outside of the United States. George has helped cooperatives with financing and capital structure issues that arise as a result of the constraints of the cooperative form of business. He has worked on issues arising from the interplay of Subchapter T with the other provisions of the Internal Revenue Code, including those of Subchapter C. He also has advised cooperatives dealing with issues arising when a cooperative is included in a consolidated return. George advises Section 521 cooperatives with respect to the requirements for maintaining that status. He has successfully defended cooperatives whose nonexempt Subchapter T, Section 521 or Section 501(e) cooperative status has been challenged by the Internal Revenue Service. He has assisted taxable rural electric and telephone cooperatives with matters related to pre-Subchapter T cooperative tax law. Since the enactment of Section 199 (the domestic production activities deduction) and its successor Section 199A(g), George has assisted cooperatives on the many tax issues that these sections present for them. That work has included including obtaining letter rulings with respect to issues under Section 199 and representing cooperatives in controversies over the application of that section. George writes and lectures frequently on cooperative tax matters and is the editor of the TAXFAX column in The Cooperative Accountant.

Bill spent his entire career working in cooperative accounting at GROWMARK. His work experience includes all aspects of order control and billing, accounts receivable/payable, financial accounting and tax. As compliance officer, he had responsibility for the administration of the compliance and ethics program at GROWMARK and its subsidiaries and retail divisions. In addition, he was been involved in negotiating major acquisitions for GROWMARK. His educational background includes a Bachelor of Science degree in Accountancy from the University of Illinois and an MBA from Illinois State University. He is a Certified Public Accountant. Bill is an active member in many industry, professional, and community organizations. He is past president of the Mclean County United Way Board of Directors as well as the past president of the Heartland Community College Foundation Board of Directors